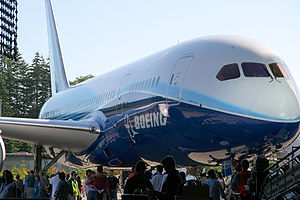 Boeing projects a $480 billion market for new airplanes in China.

China’s leading provider of passenger airplanes, Boeing, forecasts that China will need 4,330 new commercial aircraft over the next 20 years, valued at $480 billion.

The bulk of these new deliveries are expected to be for fuel-efficient, single-aisle airplanes.

Over the forecast period, China will triple the size of its airplane fleet, making it the largest airplane market outside of the United States.

“China is one of the world’s fastest-growing and dynamic aviation markets, driven by the urbanization of China, the growth of its economy and ever-increasing personal wealth,” said Randy Tinseth, vice president of Marketing, Boeing Commercial Airplanes, who released Boeing’s 2010 China market outlook today in Beijing.

“We expect domestic passenger traffic for China to grow at a rate of 7.9 percent on average,” he added.

Boeing predicts that 71 percent of China’s demand will be for single-aisle airplanes, with total deliveries reaching 3,090.

Mr Tinseth said that Boeing continues to make improvements to the 737 in terms of fuel efficiency, passenger experience and environmental performance.

The Next-Generation 737-900ER (extended range) is the newest addition to Boeing’s single-aisle family of airplanes.

Demand also will include a limited number of large airplanes (747-size and larger) to connect China with other major world destinations. The market forecast calls for about 70 airplanes in that category.

Mr Tinseth spoke about the long-standing partnership between Boeing and Chinese partners.

“Boeing’s equity investment in China is considerable, and the aviation goods and services we buy from China is significantly greater than other aviation companies,” Mr Tinseth said. “In the coming years, Boeing purchases are expected to exceed $3 billion.”

Mr Tinseth noted that there are more than 5,700 Boeing airplanes flying throughout the world with parts and assemblies built by China. China has a role on all of the Boeing commercial airplane models â€“ 737, 747, 767, 777, and the newest and most innovative airplane, the Boeing 787 Dreamliner.

Worldwide, Boeing projects investments of $3.6 trillion for 30,900 new commercial airplanes to be delivered during the next 20 years. The complete forecast is available on the Boeing website at www.boeing.com/commercial/cmo/index.html Services, events held across the US for 9-11 An Innocent Abroad in Prague: Tales from an American College Student Studying in Europe Poll: Over a Third of Americans Would Not Vote for a Mormon to be President
Subscribe to our newsletter