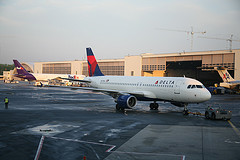 In January 2011, Delta Air Lines will be adding an eighth destination to its African route network.
They will be providing the first-ever US flight directly to Angola. An Airbus A330-200 that can hold up to two hundred and forty three seats will fly three times a week from the US to Luanda, Angola.
The flights will leave from Atlanta, Georgia from Hartsfield-Jackson Atlanta International Airport with a stop in Dakar, Senegal.
In Africa, Angola is a fast growing business travel destination. They are seeing double growth in travelers annually and see the future as growing in a similar fashion. This will save time for travelers conducting business as it will be a direct flight.
Delta is the number one US carrier serving Africa. Being the first major north American carrier to serve Africa, their flights are now up to eighty during the summer of 2010. Delta is working with TAAG Angolan Airlines for future dates to codeshare flights.
The planned launch will be on January 20th next year but tickets tickets will go on sale at Delta.com, ticketing channels, and travel agencies from October 2nd this year. Book now for the Ojai Valley Inn and Spa Pain Patients – Time to Do Something?