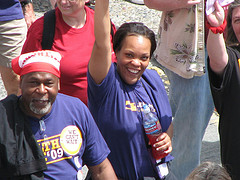 A commission of former US Senators has called for the creation of health courts or medical courts to help rein in the spiraling cost of health care.

Esquire Magazine’s Commission to Balance the Federal BudgetÂ was created just this summer to create a plan to erase the federal deficit by the year 2020.

This is the Commission’s recommendation:

“Institute medical-malpractice reform through the establishment of medical courts. This proposal would establish medical courts â€“ similar to bankruptcy courts â€“ in which verdicts are made by judges trained to evaluate scientific evidence. As an alternative to the current trial-by-jury system for medical-malpractice lawsuits, this proposal would decrease the number of frivolous lawsuits that reach trial, increase the speed with which meritorious lawsuits reach trial, and reduce administrative costs for the federal judiciary. It would also discourage the practice of defensive medicine, whereby health-care providers, under the constant threat of litigation, often order unnecessary (and costly) tests and procedures to hedge against potential lawsuits.”

The concept of health courts has long been championed by Common Good, working in conjunction with experts at the Harvard School of Public Health and with funding from The Robert Wood Johnson Foundation.

Health courts would have judges working full-time to resolve health-care disputes. The judges would make written rulings to provide guidance on proper standards of care. These rulings would set precedents on which both patients and doctors could rely.

As with similar administrative courts that exist in other areas of law â€“ for tax disputes, workers’ compensation, and vaccine liability, among others â€“ there would be no juries. To assure predictability and fairness, each ruling could be appealed to a new Medical Appellate Court.

“This is an important endorsement of health courts by a pre-eminent panel of national leaders,” said Philip K Howard, Chair of Common Good. “As our nation seeks to provide better health care at a lower cost, it is increasingly apparent that health courts are essential to changing the culture of health care delivery to eliminate wasteful spending and other defensive practices.”

Common Good ( www.commongood.org ) is a nonpartisan legal reform coalition dedicated to restoring common sense to America. The Chair of Common Good is Philip K Howard, a lawyer and author of Life Without Lawyers and The Death of Common Sense . Gene Study Could Lead to New Treatments for Chronic Pain My Story: A Message for People with Chronic Pain