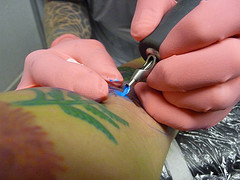 Hey dude, tatt's the wrong tattoo on my back!

Queensland Police have charged a 21-year-old tattooist who is accused of putting an obscene picture on a customer’s back instead of the image requested.

The 25-year-old customer went to a tattoo parlor in Ipswich, west of Brisbane, in Queensland Australia.

He asked the tattooist for a yin-and-yang symbol and a Chinese dragon tattoo. Instead he ended up with a 15-inch tattoo of a penis on his back with a rude slogan implying he was gay.

Queensland Police say the tattooist will appear in court next month charged with two counts of assault occasioning bodily harm and one charge relating to the Public Safety Act.

It is believed the customer and the tattoo artist had been involved in a heated argument just before the tattoo was done. Link Found Between Obesity and Pain
Subscribe to our newsletter