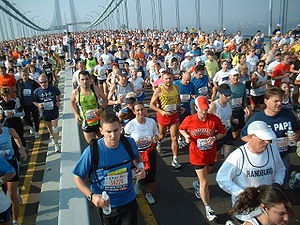 If you ran in the NYC marathon, you'll love running in Rio de Janiero, Brazil.

An advertising campaign entitled, ‘Brazil is calling you – Run in Rio in 2011’ encourages New York City runners to join the marathon race in Brazil in July next year.

The campaign promotes Brazil and Rio de Janeiro as an attractive tourist destination to the thousands of runners who ran in Sunday’s event.

Created exclusively for the ING NYC Marathon, the “Brazil is calling you. Run in Rio in 2011.” ads promote Brazil as an incredibly beautiful destination and the perfect place for athletes to test their strength and endurance.

“As Brazil prepares to host a large number of world-class sporting events, it’s important we start by spreading the word to the world-class runners and fans,” said Mario Moyses, president of EMBRATUR.

The Rio Marathon will be taking place on July 17, 2011 and will weave runners throughout the city streets and sandy beaches of Rio de Janeiro.

While the New York race on Sunday, the ad campaign for the Rio Marathon was very evident. Promoters called to crowds along the route with the “Brazil is calling you. Run in Rio 2011.” slogan, an aircraft flew over the marathon route with a giant banner, and the New York Times special edition featured a print advertisement extolling the virtues of Brazil.

Picture of the 2005 NYC Marathon, by Wikipedia The Black Hole of Pain COVID-19 and Chronic Pain – How is it affecting you?