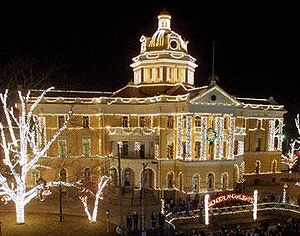 It's 40 days of holiday lights for Marshall, Texas.

As from November 24th, Marshall, Texas will enjoy a 40-dayÂ WonderlandÂ of Lights Festival. This festival is a Texan holiday tradition that will bring music, Christmas lights, and family fun along with some of the most-loved names in music.

This will be the 24th season of the Wonderland of Lights. Marshallâ€™s historic town square, landmarks around the town, and the magnificent 1901 courthouse will all be lit up with more than a millionÂ Christmas lightsÂ with hundreds of displays being showcased. This year there will be new attractions including an all star holiday concert series.

New attractions at this year’s lights festival include a trackless mini-train that will carry visitors around Marshall’sÂ picturesque town square, and a 15-foot life-sizedÂ snow globeÂ that makes Wonderland visitors part of the whole holiday scene.

Seven-year-old gospel singing sensation Rhema Marvanne graces the Wonderland of LightsÂ opening night ceremony on November 24th, as the opening act in Marshall’s new holiday music series. ActressÂ Kirsten Prout, known to fans of theÂ Twilight sagaÂ as Lucy in “Eclipse”, will also be there for the opening night.

The Four Tops, theÂ Charlie Daniels Band,Â Roy Clark, and the Von Trapp Children, members of the Austrian family made famous by “The Sound of Music,” are among the stars coming to Marshall Convention Center through December 18th as part of Wonderland of Lights.

Wonderland of Lights is one of the largest holiday light celebrations in the United States, and more than 125,000 visitors make coming to Marshall, Texas, a holiday tradition.

This year’s Wonderland of LightsÂ will finish on January 2nd, 2011.