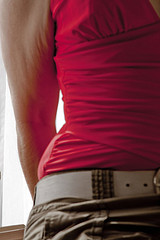 Obesity and waist-hip ratio - It's all in the genes.

Scientists from the Giant Consortium and deCode, working with academic institutions on three continents, have discovered 13 new regions of the human genome that influence waist-hip ratio, or WHR.

The study includes 18 new regions of theÂ human DNA map which contribute to obesity, and theyÂ bring together data on WHR, a measure of body fat distribution,Â body mass indexÂ or BMI, and detailed genotypic information.

The findings demonstrate the effectiveness of collaborations for powering studies large enough to detect genetic factors that are low impact for common diseases and traits.

They also revealed sexual dimorphism in the genetic basis of fat distribution. In laymen’s language, that is merely the differences in the way fat is distributed around the bodies of men compared to women.

People have known that for thousands of years, but scientists are excited because it seems they can now quantify it.

The distinctions drawn here between WHR and BMI is a step towards understanding the role of these two traits as risk factors for a wide range of diseases.

The data was gathered from more than 250,000 participants from Australia,Â Â Europe, andÂ North America.Â The findings will appear in an upcoming print edition of the journal, Nature Genetics. Self-Doubt: When you don’t trust yourself
Complications Rise From Knee Replacement Surgery Mental Illness and Chronic Pain
Subscribe to our newsletter