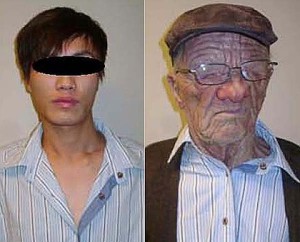 Old man boards plane and turns into a youngster.

An old man of European appearance boarded an aircraft in Hong Kong and, somewhere over the Pacific ocean, he turned into an young Asian man.

In an incredible breach of security, the passenger, wearing a latex mask that made him look decades older, walked past security guards and onto an Air Canada flight on October 29, according to a the New York Post and other media.

Update: see a Youtube video of the old man mask being demonstrated below.

Then the senior citizen walked into one of the plane’s toilets, where he removed the mask and changed some of his clothes. He then returned to his seat and sat down quietly.

Once the aircraft had landed in Vancouver, Canada, the quick-change artist was met by a security team who escorted him off the plane.

The young Asian man has claimed refugee status already, but the full story of why he disguised himself to get out of Hong Kong is not yet known.

Embarrassed security agents removed three pieces of luggage containing the man’s gloves, his clothes and his disguise kit, which comprised a silicone head-and-neck covering, rectangular glasses, a leather cap and a brown cardigan.

The young man managed to somehow exchange his boarding pass with a that of a 55-year-old US citizen. He then used the card to slip past several checkpoints and board the plane. He is now being held in Vancouver by immigration authorities. Healing Through Humor: Laughter Therapy is an Effective Pain Reducer