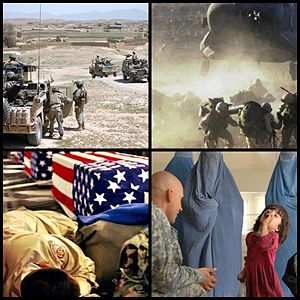 Public believes US policies in Afghanistan unlikely to succeed.

The latest Harris Poll of American attitudes on Afghanistan finds that only 12 percent of all adults are confident that US policies there will be successful and 60 percent are not confident of success.

The poll also discovered that the public gives President Obama 58 percent negative and just 31 percent positive ratings on his handling of Afghanistan.

However, only one quarter (26 percent) of the public think the United States should withdraw all its troops from Afghanistan now.

One-third (34 percent) believe the US should set a timetable for withdrawal, while one-in-five say more troops should be sent to Afghanistan for a few months to stabilize the situation (22 percent) or are not sure (19 percent).

These are some of the results of the Harris Poll of 3,084 adults surveyed online by Harris InteractiveÂ between October 11th and 18th, 2010.

Other findings in this Harris poll include:

While half of Democrats (50 percent) give President Obama positive ratings on his handling of Afghanistan, almost two in five (38 percent) give him negative ratings, as do four in five Republicans (80 percent) and two-thirds of Independents (66 percent);

The 60 percent majority who are not confident that US policies in Afghanistan will be successful has increased from 55 percent in June and 53 percent in January; and,

Most people either see no real change in the situation in Afghanistan (49 percent) or are not sure (13 percent). Among those with an opinion, many more people think the situation is getting worse (27 percent) than think it is getting better (11 percent).

Given these polling numbers, the Democrats are perhaps lucky that so little attention has been paid to the situation in Afghanistan leading up to the mid-term elections. However, President Obama may not be as lucky as he starts planning for his re-election.

Space flights brought to you by Boeing It’s 40 days of holiday lights for Marshall, Texas
Subscribe to our newsletter