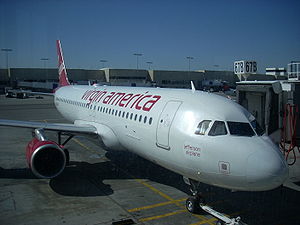 Virgin America to fly to Dallas-Forth Worth by December.

With the airline expanding, this will be Virgin’s twelfth destination. To celebrate, Virgin is giving a three day sale on their fares called Texas Sized for any of their travel destinations. Tickets must be purchased by August 12th by 11:59 pm PDT. Fares will start at $129 for the main cabin. You must use the tickets by August 17-November 17, 2010.

With north Texas growing, especially with Ft. Worth and Dallas, this is a great opportunity to join the competition and launch two places to connect to from Texas. Consumers will benefit with the added choices as North Texas has a strong business environment and interesting attractions. Texas is very proud that Virgin America chose them to add to their fares.

Virgin America is a California-based airline that is reinventing today’s travel. It has upscale service but low fares. They also will be providing connecting flights from DFW to Las Vegas Nevada at the LAS Airport, San Diego, California (SAN), and Seattle, Washington (SEA). A Description of Pain