Nearly half of the American soldiers deployed to Iraq and Afghanistan return home to the U.S. in chronic pain, according to a new study that also found about one in seven soldiers were using opioid pain relievers.

The study, the first to assess the prevalence of chronic pain and opioid use in the infantry after combat deployment, is being published in JAMA Internal Medicine.

Researchers at Walter Reed Army Hospital surveyed over 2,500 soldiers who had been deployed to Iraq or Afghanistan, nearly half of whom reported combat injuries. The prevalence of chronic pain was much higher than the civilian population, with 44% of the soldiers indicating they were in pain longer than three months and 15.1% reporting the recent use of opioids. That compares to 26% and 4% respectively in the civilian population.

U.S. and Afghan soldiers on patrol.

“These findings suggest a large unmet need for assessment, management and treatment of chronic pain and related opioid use and misuse in military personnel after combat deployments,” wrote lead author Robin Toblin, PhD, of the Walter Reed Army Institute of Research in Silver Spring, MD.

“Notably, 44.1% of soldiers reporting opioid use reported no or mild past-month pain, including 5.6% with no pain. This might imply that opioids are working to mitigate pain, but it is also possible that soldiers are receiving or using these medications unnecessarily. This is cause for concern because opioids should be prescribed generally for moderate to severe pain and have high abuse and overdose potential.”

Soldiers most likely to be in chronic pain were 30 years or older, married or previously married, injured in combat, or suffering from post-traumatic stress disorder (PTSD).

Soldiers most likely to be taking opioids were 25 years or older, married, injured during combat or suffering from chronic pain.

“The high incidence of chronic pain and opioid use among returning veterans does not surprise me one bit,” said Darisse Smith, a former Army helicopter pilot who wrote about her struggle with pain, opioid use and addiction in a column for National Pain Report. 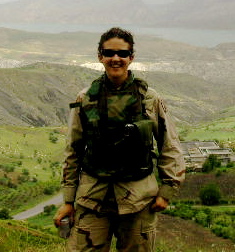 “I am especially not surprised that soldiers are not seeking treatment and still utilizing opioids because the VA has made a conscious decision to turn a blind eye to this problem,” Smith wrote in an email.

“There was a conscious decision from the VA not to give soldiers who have been to Iraq and Afghanistan significant opioid treatment due to the high incidence of substance abuse and suicide in this demographic.  Unfortunately, the VA didn’t buffer up any of its other supporting therapies, leaving soldiers in legitimate pain to use their own wiles to find pain treatment.”

Among the surveyed soldiers who reported chronic pain, nearly half (48.3%) were in pain for a year or longer and over half (55.6%) said they were in daily or constant pain. But less than one in four (23.2%) were taking opioids to relieve their pain.

“While chronic pain and opioid use have been a long-standing concern of the military leadership, this study is among the first to quantify the impact of recent wars on the prevalence of pain and narcotic use among soldiers,” said Wayne B. Jonas, M.D., LTC (Ret.) of the Samueli Institute in an editorial also published in JAMA Internal Medicine.

“The loss of human potential is inestimable. This staggering cost will become the greatest threat to national defense as the nation is crush under its debt. Thus, for reasons of current and future national strength, and most important, the suffering of our service members and veterans, we must transform ourselves in the way we manage pain. We can and must do better.”