A small California company trying to develop a market for its prescription drug vending machines saw the price of its stock soar over 3,000 percent this week — thanks to some valuable media attention and a bit of hype over the legalization of marijuana.

Shares of Medbox Inc. (OTC: MDBX), which trades on the over-the counter or “pink sheet” market, rose from $4.75 this week to as high as $215. At one point, the company technically had a market capitalization of over $2 billion – although that was based on only a few hundred shares being traded.

Earlier this month, Medbox said in a press release it had earnings of $1.3 million in the third quarter. No SEC filings were immediately available on the company.

Medbox shares rose after it was featured in a Wall Street Journal story on companies that could benefit from the legalization of marijuana.

“For regular investors looking to get in on the action — and without having to actually grow or sell drugs — there are several small-cap stocks that stand to gain from marijuana’s growing acceptance,” the Wall Street Journal said. “Medbox, an OTC stock with a $45 million market cap, for example, sells its patented dispensing machines to licensed medical-marijuana dispensaries. The machines, which dispense set doses of the drug after verifying patients’ identities via fingerprint, could potentially be used in ordinary drugstores, too.”

The article quoted Medbox founder Vincent Mehdizadeh as saying, “The smart money is trying to help with compliance and transparency.”

This month voters in Massachusetts legalized marijuana for medicinal purposes, making it the 18th state to enact such a law. Voters in Colorado and Washington went even further, becoming the first in the nation to legalize marijuana for recreational use. 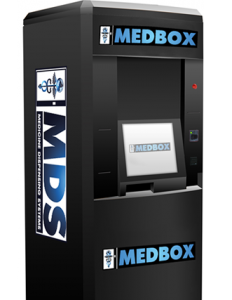 Medbox says it has 130 of its prescription drug dispensing machines in operation and hopes to install another 40 in the next quarter. It only recently began marketing its vending machines as a way to dispense medical marijuana. The company also makes lock boxes and safes for prescriptions medicines.

CEO Bruce Bedrick initially welcomed the sudden interest in Medbox, saying the company was “encouraged and extremely excited by the dramatic increase in our stock price.”

But by Friday Medbox was trying to damper expectations, releasing a statement saying “the company attributes the share price increase to a lack of float and not based upon present business economics.”

“Management has no explanation for the volatility of the stock and has expressed concern that the extreme and sudden rise in the price of the Company’s common stock is unwarranted and cannot be maintained. Management urges investors to fully evaluate the merits and risks associated with buying or selling the Company’s securities,” Medbox said in a warning statement.

“We will take steps to attempt to avoid a roller-coaster syndrome, with the stock rising and falling in dramatic fashion,” said Mehdizadeh, adding that Medbox would investigate ways to minimize any potential shareholder losses should the stock price fall rapidly.

“We are in discussions with our attorneys to determine if we can reward our early investors who believe in our company, by giving them company-owned shares should the price they bought at fall significantly,” Mehdizadeh said.

At the close of trading Friday, Medbox’s stock had fallen to $20 a share, with less than 1,500 shares exchanging hands during trading hours.

Several marijuana-related stocks enjoyed rallies after the marijuana initiatives were approved, but none with the magnitude of Medbox. They include Medical Marijuana Inc. (OTC: MJNA), which makes marijuana ice cream, snacks and other edibles; Cannabis Science (OTC: CBIS) which is developing marijuana-based medicines for cancer and HIV/AIDS patients; and Hemp Inc. (OTC: HEMP) which makes a variety of medical marijuana products.