Researchers are touting a “breakthrough discovery” in the diagnosis of fibromyalgia – a complex and painful condition that affects millions of people around the world.

In a new study being published in Pain Medicine, the journal of the American Academy of Pain Medicine, researchers based at Albany Medical College say they may have finally found the first biological evidence of what causes fibromyalgia.

“Instead of being in the brain, the pathology consists of excessive sensory nerve fibers around specialized blood vessel structures located in the palms of the hands,” said Frank Rice, PhD, President of Integrated Tissue Dynamics LLC (Intidyn) and the senior researcher on the study.

“We previously thought that these nerve endings were only involved in regulating blood flow at a subconscious level, yet here we had evidence that the blood vessel endings could also contribute to our conscious sense of touch… and also pain,” said Rice.

“This discovery provides concrete evidence of a fibromyalgia-specific pathology which can now be used for diagnosing the disease, and as a novel starting point for developing more effective therapeutics.”

Fibromyalgia is a poorly understood disorder that is characterized by joint pain, deep tissue pain, fatigue, headaches, depression and lack of sleep. It affects about 10 million Americans, and one in 20 people worldwide. The underlying cause of fibromyalgia has confounded physicians for decades.

To analyze the nerve endings, Rice and his colleagues used microscopic technology to study small skin biopsies collected from the palms of fibromyalgia patients. The study was limited to women, who have over twice the occurrence of fibromyalgia than men. 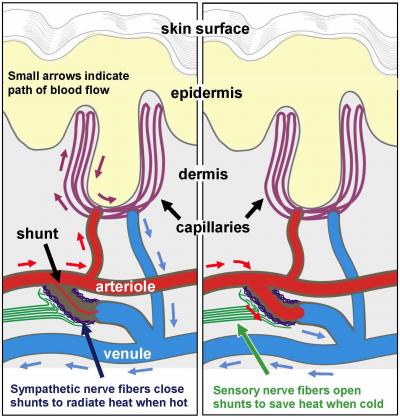 The team found the extra sensory nerve fibers in tiny muscular valves or “shunts,” which form a direct connection between arterioles and venules, the blood vessels in the skin.

“The excess sensory innervation may itself explain why fibromyalgia patients typically have especially tender and painful hands. But, in addition, since the sensory fibers are responsible for opening the shunts, they would become particularly active under cold conditions, which are generally very bothersome to fibromyalgia patients,” said Dr. Charles Argoff, an Albany Medical Center neurologist and pain specialist, who was the study’s primary investigator.

Although they are mostly limited to the hands and feet, researchers say the shunts could have another important function which could account for the widespread pain, achiness, and fatigue that occurs in fibromyalgia patients.

“An enormous proportion of our blood flow normally goes to our hands and feet. Far more than is needed for their metabolism” noted Dr. Rice. “As such, the hands and the feet act as a reservoir from which blood flow can be diverted to other tissues of the body, such as muscles when we begin to exercise.”

“Therefore, the pathology discovered among these shunts in the hands could be interfering with blood flow to the muscles throughout the body. This mismanaged blood flow could be the source of muscular pain and achiness, and the sense of fatigue which are thought to be due to a build-up of lactic acid and low levels of inflammation (in) fibromyalgia patients.”

Reaction to the study from fibromyalgia experts was mixed.

“It is exciting that something has finally been found.” said Dr. Gary Bennett, Senior Research Chair of the Alan Edwards Center for Pain Research at McGill University. “We can hope that this new finding will lead to new treatments for fibromyalgia patients who now receive little or no relief from any medicine.”

“A great deal more research is indicated, but this is a good start. Loss of thermostatic control is a major complaint for many fibromyalgia patients, myself included,” said Celeste Cooper, RN, a patient advocate and author of Broken Body, Wounded Spirit: Battling the See-Saw of Chronic Pain.

“I hope they also screened the participants for the presence of myofascial trigger points.  These knotted up pieces of muscle fiber can restrict blood flow, even in the smallest of vessels,” Cooper said in an email to National Pain Report. “Many FM patients have a disorder called Raynaud’s disease or phenomenon where their hands, feet, nose, and sometimes ears turn blue when exposed to cold.  They become numb and very painful on re-warming at which time, the color turns red. This is thought to result from spasm of the same vessels studied here.”

“Certainly, there is more than a casual connection of myofascial pain syndrome and Raynaud’s, but I am uncertain that fibromyalgia is a sympathetic nervous system disorder.  We just need more research and consideration of comorbid disorders.”